The goal for Indonesia is to increase Indonesia’s annual influx of tourists from 14 million to 20 million a year. To do that, the tourism sector needs accurate and timely data. However, in a country with 17,000+ islands and vast land borders, it is difficult to measure inbound tourism at all entry points to the country. This is why Indonesian official statistics did not include all tourists who were coming from Indonesia’s directly neighbouring countries. That is until recently when Indonesia tapped into a unique big data source – mobile positioning data (MPD).

Challenges of Ministry of Tourism

Today, almost everyone on the move has a mobile phone. Roaming MPD-based statistics can be used to measure cross-border tourism, so that the decision-makers of the state would have the most up-to-date and reliable statistics. With the help of Positium, Indonesia’s Ministry of Tourism developed a system to count tourists in these excluded border areas and thus support United Nations Sustainable Development Goal (SDG) 8 (sustainable growth and job creation) – through accurate data. 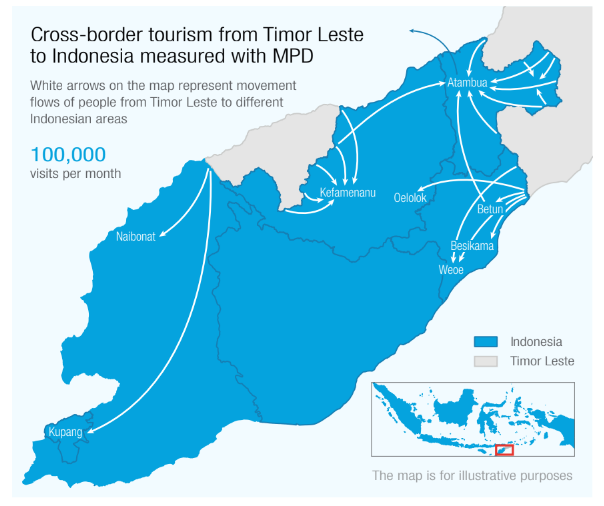 Indonesia quickly found that, inline with international benchmarks, the share of tourists from neighbouring countries was 30% of all tourists instead of the previous 7% measured with traditional methods. For example, MPD shows that, between Indonesia and Timor Leste alone, close to 100,000 visitors cross the border every month for for shopping, visiting relatives and fellow tribesmen. Consequently, Timor Leste established its place among the top 5 contributors to visitor arrivals in Indonesia after MPD measurement was put in place. This knowledge has been relevant in directing new investments to infrastructure, tourism development and cross-border events in the country’s border areas.

Restarting Tourism Industry In The Age Of Covid-19 Pandemic

How Mobile Positioning Data provides needed insights for the decision ...